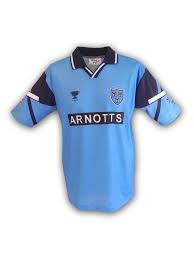 Everyone who is interested in GAA has rituals for All-Ireland Finals. We had rituals for all Dublin matches. It started as soon as tickets were released for sale. Jim was our organiser and he searched high and low until all the family were accommodated. He was also the supplier of jerseys as he had a collection from the seventies. The tickets were distributed in the Barn Owl on James Street on the morning of the game some tickets might not come into Jim’s possession until that morning. When the lads were young my tickets were for the stand but we quickly graduated to the Hill with “the men”. Myself and the lads always headed off for the grounds early to get near walls or barriers, places where little lads might sit and get a good view of the proceedings.

All-Ireland semis and finals were a different story – Dublin seldom made it to the latter stages of the championship. I remember the Fourteen (men) on, (number) Fourteen was off Leinster final of 1979. I knew the songs of Heffo’s Army but the glories of the last few years can obliterate the many, many days of walking up Clonliffe Road saying “Maybe next year”. 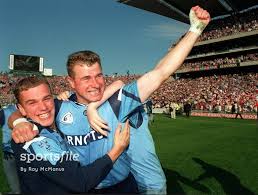 However we were lucky and got to attend many semis and finals, both hurling and football. Our club had programme selling rights and so we hit for Croker early to collect our bundles of “official programmes”. Getting into the game was dependent on selling our allocation so we found the best sites on the approach roads and urged match goers to purchase. Having two small lads with me definitely increased my selling power. There were no seats reserved for programme sellers so when we eventually got into the field we sat on the steps. A hearty picnic at half time was welcomed after the early start to the day.

Jim’s not getting us the tickets any more ….though I’d swear he’s in a front row up above cajoling the Blues on! We’ll certainly need some divine intervention on October 1st.

So ticket provision falls to David, Cumann na Bunscol, Parnell Ticket holders and anywhere else they can be begged and borrowed. This year a smaller group than usual hit off for Croker, to various parts of the stadium, carrying the usual pre match tensions. I suppose having thought I would never get to Croke Park again–and being there for the win last year, my priorities had shifted slightly and it was a little bit easier to be magnanimous. Our run of wins would have to end – after all winning is cyclical – but still I hoped it would not be TODAY!

It was hard to believe the number of Mayo supporters – where had they got all the tickets while they were like hens’ teeth for us, some of our staunchest supporters relegated to the Ansley House to watch the proceedings ON TV!!!! Our Sea of Blue was only a sprinkling in the Field of Red and Green.

Tempers looked frayed even before the game began and it was obvious that some sort of shemozzle had occurred in the tunnel. There was funny air in the warm ups as Dublin seemed even then to be lacklustre. A crazy game started, players slipping and sliding all over the place and soon we had two goals on the board, neither scored by a Dublin player! A pretty harsh black card  for James McCarthy (although his replacement Paddy Andrews gave the flagging attack some momentum) did little to allay Dublin fears. By some miracle, we went into the break leading by double scores, 2-4 to 0-5.

Every Dublin fan still hoped: Jim Gavin will give them a serious talking to and we’ll have a game. But it was Mayo who stormed out and rattled off five unanswered points. The men who had restored football to greatness, this wonderful team of the decade, remained anonymous.

The draw was a fair result – and YET I have a question: did the referee fail Foundation Level Maths at the Leaving Cert, considering he somehow arrived at the grand total of 7 MINUTES of injury time, despite no major stoppages in the half.

Yes the draw was a fair result. One of the greatest teams in history didn’t deserve to lose having played so badly. And Mayo captain Cillian O’Connor showed serious confidence to level the game (that’s a tongue in cheek comment if ever there was one!!!!!!).

And so was forced the first All-Ireland Senior Football Final replay in 16 years. And a new October ritual of preparing for an All-Ireland will begin.