There are six of us from Ireland on the trip. We were collected at Koln/Bonn Airport by “an old biker” who proceeded to bore us with the ancient history of Cologne – that’s what I think he was on about anyway but with his monotonous voice that could be barely heard above the engine, twas hard to know. He hit rapidly for the hills when we arrived at the Novatel to find there was no booking!!!!!

It all worked out – German competency at its best- lovely room and free mini-bar. Quick freshen up and we made our way to a really typical German Restaurant/Beer house recommended by receptionist; we sat at a long table, sharing with a local family who enjoyed out attempts at understanding the menu (even the English version), however we chose wisely and had an amazing meal – (“Kolsche Pizza” – delicious) and a few beers before home!

Next morning a new guide arrived to take us to tour the Cathedral and Cologne. Antje was super – a Cologner who loved her city, warts and all, and who presented it with such enthusiasm. She congratulated us on our choice of eatery the night before. As we travelled around, she pointed out many of the important sites with historical references and stories of social interest, all presented with the humour of ‘a Cologner’ have appropriately (and wittily) nicknamed some of their city sculptures; , just like us ‘Dubliners’ with our “Hags with the Bags”, “Floozie in the Jacuzzi”, “Tart with the Cart”, etc. One couldn’t be but impressed with the way this city has been restored following its almost total destruction during the war.

You could not but be impressed with the restoration of buildings that has occurred since the war – all back to original glory. In the second World War, Cologne was devastated by air bombings. Famously, Cologne’s legendary cathedral was spared by the Allies, partly due to its cultural significance, but also because it helped direct air pilots toward Cologne (it being one of the world’s tallest buildings at the time, indeed the world’s largest Gothic church in northern Europe).

St. Alban’s stands in stark contrast, blown out and restored only at its facade. It was left in such shape as a reminder of the pains of war and the loss of human life sustained by war. This ruined church evidently had a long history before its destruction during World War II. As in many cities, Cologne decided to leave a prominent church in a ruined status as a memorial to the sadness caused by war. There is a moving Kathe Kollwitz statue representing the grief of parents who have lost children in war and there is also a memorial to prisoners of war who had not yet returned (German prisoners of war generally took 3 years after war’s end to begin coming back and some were held for longer). A marker at the site reads: “Still the prisoners of war await their return home,” a stunning metaphor for all victims of war.

And the Kolner Dom – the Cathedral of Cologne! WOW! 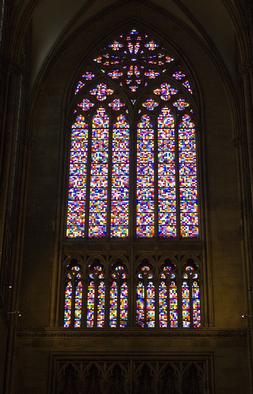 The most recent of the windows using all the hues of glass from the old windows to replace that destroyed in Cologne bombings.

Antje was brilliant – wonderful stories about the Cathedral but never imposed on our own freedom of “just enjoying the place”.

The Shrine of the Magi. Cologne was stop of point for pilgrims to Jerusalem – so its likely that relics would have found there way here. 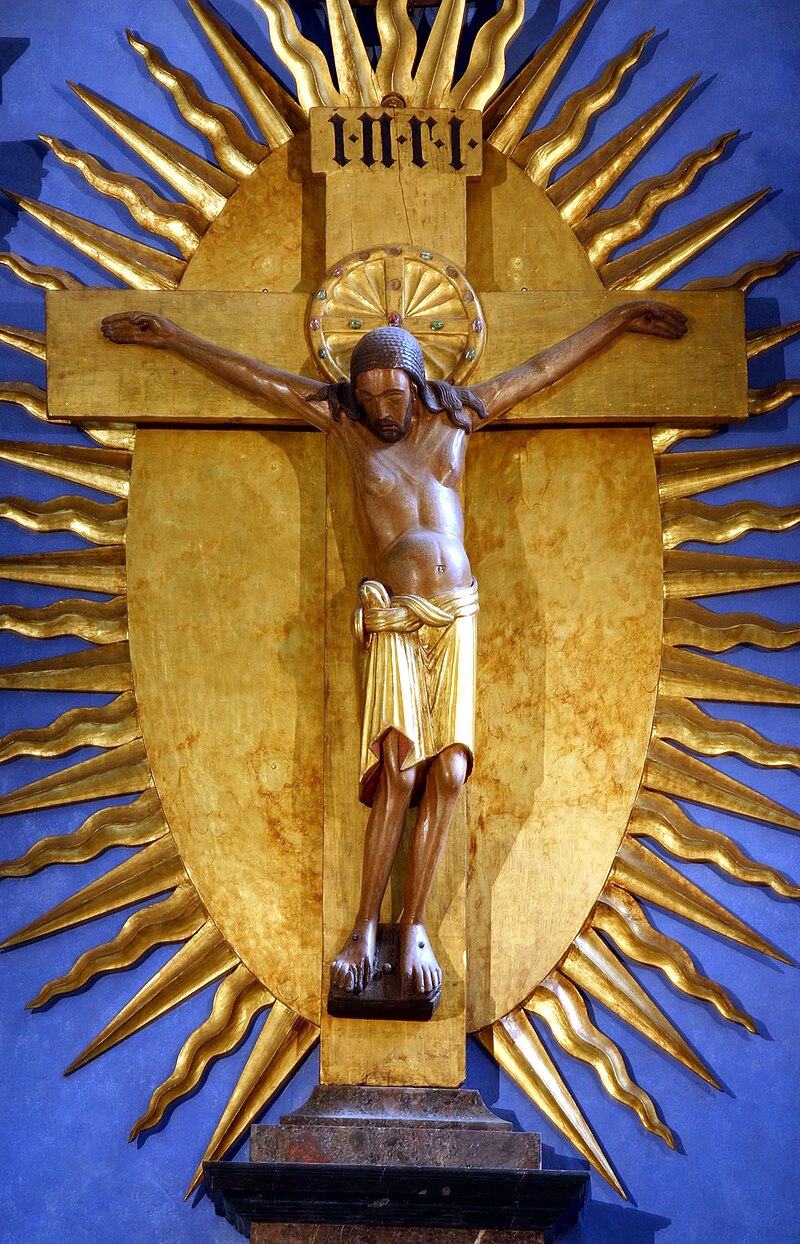 The mosaic floors made by who other than Villeroy and Boch (still going strong Kildare outlet!) 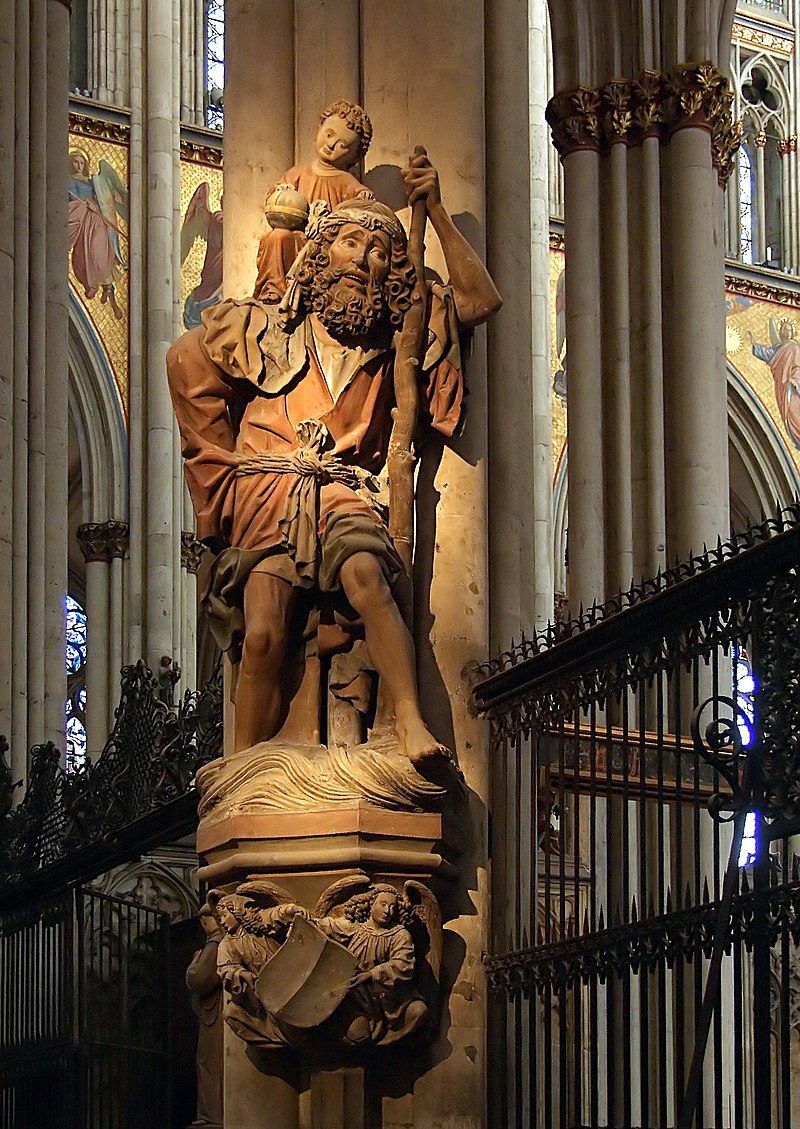 St Christopher – always invoked for the traveller by Mam – even when he lost his job!

Picture of the Magi visiting the stable, with side panels implying the Cologne gentry were also there. 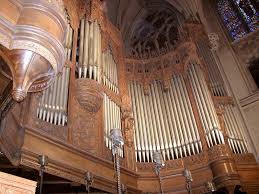 the two organs the old and the new linked so that both can be played at same time, ………VERY IMPRESSIVE!

Antje offered a trip around the old town, but I took myself off to Café Reichard to “hold tables” for the walkers! What a wise choice – very friendly waitresses, great cakes and pastries, ice cream, chocolates; I chilled out on the terrace with a coffee until the wanderers arrived back and then went inside to a reserved table to FEAST on cake. Sinful!!!!

Back to the bus for short hop to the port to board the MS A-ROSA SILVA and the start of the cruise northwards to the Low Countries.