I was from the Dublin of GAA (Caisleán) and Soccer (St Pat’s Athletics). My first ever date was to Richmond Park! Rugby never featured except when the Cork relatives (in-law) visited and to them rugby was Munster.

Then I met Shay and himself, Gerry, Terry and Peter joined Railway Union. This was not blood and guts rugby I see on TV today; I think they may have been on the 20th team (maybe a bit of an exaggeration but definitely one of the lower teams). They NEVER won! But the APRES MATCH was brilliant.

I also stood shivering on the terraces of old Lansdowne Road on more than one occasion – I remember buying a second hand fur coat in the Georges St Arcade for the freezing experiences. Even then the standard of dress at a rugby match was very different to what one wore to Croker! I went into labour with David at a party in Railway Union, dashing straight from there to Holles Street!

I remember knitting David an outfit in Red White and blue, the colours of Railway Union.

Brian played for a while; it was said he was quite talented; he has a Leinster medal somewhere. As a mum I only saw the cuts and bruises.

Even though I lived next door to a rugby family (Irish player), Rugby was still Munster and social but not something I’d turn on the telly to watch!!!!

Not until a copy of the Wexford Journal arrived in May 2006 from Robert did the memories of what Rugby meant to Munster men come back to me. I remember being fascinated by the supporters’ efforts to get to Wales. (Kept 2 articles from the time – see below) 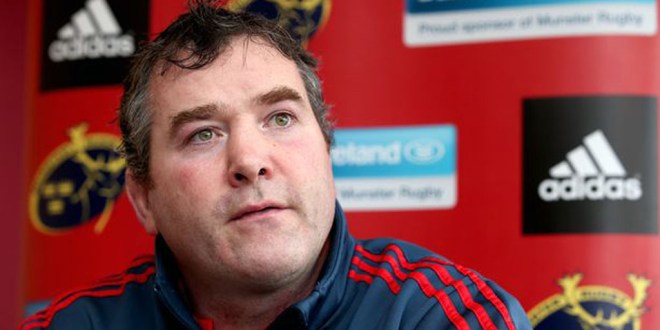 So why do I think of all that now? Well the wonderful tributes that not only the celebrities but the ordinary people of Munster are paying to Anthony Foley clearly indicate the importance of this Munster man in a Munster sport. One could not be but touched as the hearse drove by Thomond Park and Munster fans lining the Limerick streets sang the rousing “There is an Isle” – absolutely beautiful, and so sad.

Six fanatical Munster rugby supporters travelled to the Heineken Cup Final in Cardiff in style last weekend on board a yacht from Kilmore Quay.

Dermot Greer who runs Sailing Ireland in Kilmore was contacted by the eager Limerick men asking him to bring them to the game on his 37ft yacht, ‘Yola’.

When they told Dermot, a life-long rugby player, that they would give him a ticket to the Munster versus Biarritz match if he agreed, it was an offer he couldn’t refuse.

In the lead-up to the final at the Millennium Stadium in Cardiff, tickets were changing hands for up to €500 and all flights and ferry sailings were booked up.

Dermot’s passengers arrived on Thursday evening last and spent the night on the boat in Kilmore Quay, setting off on Friday morning. Before leaving port, they bedecked the vessel in the Munster colours with a few Wexford and Limerick flags thrown in for good measure.

It was originally planned to leave on Thursday in a flotilla with five other boats from Cork but the trip was postponed until Friday due to strong winds.

They sailed all day Friday and right through the night, arriving at Penarth Marina in Cardiff early on Saturday morning, catching sight of the Millennium Stadium from the bay.

‘The stadium is only ten minutes’ walk from the marina so it was very convenient’, said Dermot, a highly experienced yachtsman and an Irish Sailing Association and Royal Yacht Association instructor.

Some of his passengers also have sailing experience and for them, the adventure was an opportunity to indulge two passions – rugby and the sea. The skipper himself played rugby for many years.

‘Yola’ is a passenger boat registered with the Department of the Marine and is usually hired for shorter trips around the Saltee Islands, Dunmore East and Waterford City although Dermot tries to take one or two longer journeys every year to places like the Isles of Scilly.

The rugby fans were due to set sail from Penarth on Sunday but sheltered in Milford Haven on Monday following forecasts of gale force winds.

‘We didn’t want to chance crossing the Irish Sea. The weather was looking a bit iffy so we decided to stay until Tuesday morning’, said Dermot. The ‘Yola’ was expected back in Kilmore Quay on Tuesday evening.

He and his passengers thoroughly enjoyed the trip to Wales. ‘The journey over was super. The wind was behind us all the way’, he said.

‘We had success on the pitch which was great and there was a fantastic atmosphere in the stadium’.

Munster led French opponents Biarritz by four points, but hadn’t scored in 18 minutes and had just turned over the ball, leading to a break in play.

The men from the southern province had been here twice before, in 2000 and 2002, with heartbreaking losses on both occasions. Gasping for air in the white-hot inferno of the Millennium Stadium, the Irish province were out on their feet as 74,000 – with easily the vast majority supporting Munster – anxiously looked on.

Out-half Ronan O’Gara glanced up at the big screen – and then one of the most remarkable scenes in modern sport took place. The stadium screen relayed live images from a heaving O’Connell Street in Limerick, where a crowd was watching the game. A roar went up in Cardiff. Suddenly realising their team, relations and friends in Cardiff could see and hear them, all of Shannonside roared back. The guttural Munster crescendo descended from the stands, rolling out onto the pitch. The stadium shook.

There was only going to be one winner. We knew then that it was going to be an unforgettable day, and 10 years have failed to diminish those memories.

Getting to Cardiff was an achievement in itself. The stories of fans travelling from around the world rivalled the adventures of Phileas Fogg. Tara Robinson from Limerick made a 32-hour bus journey through Brazil and Argentina before flying to Madrid, on to London – and made it to Cardiff 20 minutes before the game began. Another couple travelled from New Zealand.

Fr Liam Ryan ensured the Augustinian church in Limerick was packed the week before with a prayer of desperation offered to St Jude: “Help me to find a flight, a ferry, a paddle boat, a ticket for the stadium in Cardiff . . . Bless Paul, ROG and all the lads so that they may bring home the Heineken Cup, the Holy Grail . . . If you answer my prayer, I promise to limit myself to one drink if they win. Thank you for the gifts I am about to receive.”

Battle-hardened supporters who’d ventured to many a foreign field still recall that weekend as one of the best. Think of the Munster hurling final in Thurles and double it. It wasn’t confined to the rugby fraternity either.

Munster rugby unified all – as GAA and soccer diehards rowed in. Big burly men, who barely acknowledged each other at home, drank, hugged and sung with all their might. Families separated across the globe reunited that weekend. ‘De Banks’, ‘Slievenamon’, ‘Limerick, You’re A Lady’, ‘Spancil Hill’ and ‘The Rose of Tralee’. Even ‘Molly Malone’. It never ceased. Line-outs, rucks and mauls – and that was just the pubs in Cardiff the night before.

They slept on couches and floors. “If your mother asks, we had a fine B&B,” one dad warned his 12-year-old son.

“After a rocky night over on the boat, 23 of us stayed in a house about two miles outside Cardiff. There was only meant to be seven in it.

“Pebbles Ryan from [Tipperary] town was laid out on a couch with a towel over him – the same as being laid out in Tom Fogarty’s funeral home in Tipp town. We didn’t see a dinner from Thursday night until Sunday. I went hoarse. It was the greatest weekend of my life.”

On Saturday, apprehension, anxiety and angst. Two men bedecked head-to-toe in Leinster blue got a roaring ovation and 1,000 foam rugby balls hurled at them when they walked into the Prince of Wales pub. They never paid for a drink the rest of the day. Actor Peter O’Toole spoke of his late friend and Munster supporter Richard Harris.

Nerves were unbearable. How could we take 80 minutes?

The game was a rollercoaster. Nip and tuck. Stringer’s try. You little beaut. Munster by seven at the break. More penalties and drama. O’Gara stretched the lead to four with six minutes to go. Touching distance.

All stood, as Biarritz laid siege. But then, just before 5pm on May 20, 2006, referee Chris White blew the sweetest sound ever – the final whistle. Munster were champions of Europe.

That night is hard to describe. Happy, laughing faces everywhere. The best rolling maul ever witnessed happened on St Mary Street around midnight. Twenty police officers wrestled with 40 fans for possession of a giant rugby ball, with thousands cheering.

The night never ended. It just gave way to morning and dashes to ferries and airports. It rained in Limerick at the homecoming but we didn’t feel a drop. Licensing laws were ignored and work was forgotten.

It’s hard to believe that, a decade later, the final of the European competition has just been played, but without Irish involvement. Nobody seemed to notice or care.

Maybe the heady days of the Champions Cup have peaked and the parties we held in Clermont, Leicester, Toulouse, San Sebastian and Cardiff will never be repeated. One can only hope more rich days lay ahead with even more memories to be made.

The final word to the late great Peter O’Toole speaking to this reporter, then with the ‘Limerick Leader’, barely an hour after the final.

“Dickie [Richard Harris] is dancing in the heavens with this result. They have done it all now, they have beaten the All-Blacks, the Aussies, and are now the champions of Europe. Remember this is only a club and yet there was over 70,000 supporters here in the stands and they came across a sea for this. Who else would do it?” asked O’Toole.

Before waiting for an answer, he spoke for all of us: “I have never seen anything like it.”