A combination of Brexit and Covid conspired to take the annual Knitting and Stitching show out of RDS Ireland. So our group of four Irish knitters and stitchers set out for the November Harrowgate Show.

Despite the Aer Lingus delay we reached Bradford and commuted firstly to Leeds, arriving before most of the shops opened. An English breakfast in a small coffee shop set us up for the long day ahead. The various Leeds Arcade which were the attraction, didn’t fail to impress us and retail therapy started early in the trip with purchases of socks (by me) and jewelry.

The bus journey to Harrowgate gave us a fine view of the rolling dales of Yorkshire – a surprise for me as I expected the harsh and isolated moors of the Emily Bronte’s Wuthering Heights.

We arrived in the spa town of Harrowgate in the afternoon and found our way to The Crown Hotel.  The hotel was a testament to the history of the town, with a history dating back over 300 years, its enviable location moments from many of Harrogate’s most popular sites and close to the convention centre where the trade exhibition  would take place. The hotel was set with a wide open vista of a selection of impressive Victorian and Georgian crescents. In our initial mooch around the town (we were reserving the serious shopping for Friday) showed  architecture, galleries, antique shops and tea rooms the most famous of which Betty’s Tea Rooms which still has the charm and the delicious pastries of the early 1900’s when it was founded.

My first workshop was scheduled for 10am so after a leisurely breakfast i strolled down to the Convention Centre. It was teeming rain but that mattered little as an indoor day was planned with the following workshops booked.

There was of course some ‘compulsory’ shopping in the main hall between workshops and also viewing of the galleries – my favourite was that of the Embroidery Guild with their display of Embroidery across the decades and the Guinness Book of Records longest piece of embroidery.

Work on this embroidery started in 2003 and in 2009 it measured more than 605 metres, a new Guinness World Record. The embroidery piece was hand worked by 7000 embroiderers from all over the world and contained a plethora of designs, colours and subject matters, including 3D insects, flowers, people’s names, etc. People were free to add to work during the show whatever motif they wanted.

Today was dedicated to rummaging in the many Charity and Vintage Shops of Harrowgate from which a selection of jewelry, dressing gowns, dresses and kimonos were added to the craft stash of yesterday, all of us hopeful that we would be within the 10kg that Aer Lingus allowed for carry-on luggage. Right in the middle of the Montpelier Mews, we were delighted to find Jenny’s Tea Shop, a tiny little  for home-made soup and Quiche and sandwiches. 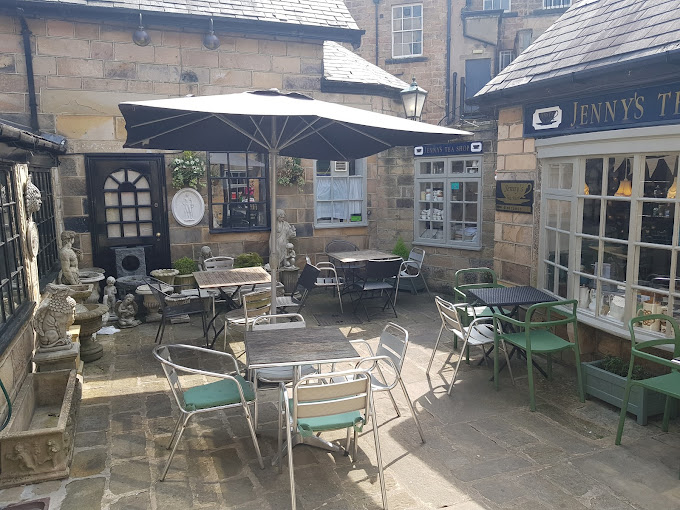 We all agreed that Harrowgate had still plenty to offer us if we returned for another visit.